Continuing our aerodynamic discussion on BMW race cars we’ll continue discussing the front of the car moving backwards. Last time we went through some of the key design principles involved in creating an efficient splitter and front air dam. A natural continuation of that discussion moves us straight to dive planes or canards. Dive planes are typically an upward swing either integrated into the front bumper or splitter as an upward angle which can serve several purposes:

Depending on the design intent canards and dive planes can take a number of different shapes. The standard canard is a small flat shaped wedge on the side of a cars front bumper that can add a little front downforce for a small drag penalty. A more aggressive front dive plane is pictured below. This dive plane was created to serve several purposes. The large tire was encountering lots of direct air which would have created drag, the steep angle of the dive plane creates a significant amount of downforce at the expense of drag, but also directs air away from the front tire reducing some drag.
Purpose built race cars will often feature the front canard/dive plane integrated into the splitter or bumper design as a 3D shape. This is truly ideal and can be added to with a secondary dive plane stacked on top of it if more front downforce is desired. Again, the design ultimately depends on the application and how must adjustment is needed to balance aero load.

The next simple aerodynamic component we’ll discuss is the side skirt. In principle a side skirt is very similar to an air dam, the purpose is to prevent air from traveling underneath the car as much as possible. Because we’ve created a splitter at the front of the car we end up with a relatively small volume of fast moving air traveling underneath the car. As we discussed previously this means we get a high pressure zone above and around the car and a low pressure zone underneath the car. This pressure differential is what creates our downforce. The problem we now have to combat is the high pressure air attempting to move to areas of lower pressure, without side skirts the air will freely rush to the underbody of the car from the sides. To prevent this as much as possible a purpose built race car will have side skirts that extend almost to the ground. Since the typical road car turned race car is designed to have a bearable amount of ground clearance for street driving, we often add side skirt extensions on our BMW race cars to attempt to prevent that air from rushing underneath the car. Material selection is important here, If we use something strong and stiff we won’t be able to hang it very low. If we use something soft and flimsy it will buckle and allow the air to travel underneath the car regardless. A material we have found to have a good balance of strength and flexibility is conveyor belt material. Fastening this material adequately to our side skirt we are able to have a fairly rigid air dam running down the side of the car while also building it low enough that it can touch the ground during cornering and breaking creating an almost perfect seal. Of course, this side skirt will gradually wear down and need to be replaced so its best to choose a cheap material if running on a budget.

Concepts like these were originally developed in the 60’s and 70’s by formula 1 and Can Am teams using the concept of sliding skirts which literally always contacted the ground but could slide up and down on slots so that there was always a nearly 100% seal created underneath the car. This concept (in combination with others) created cars that had so much downforce that when a side skirt would get stuck in the up position the driver experienced sudden and catastrophic loss of downforce which often predicated a crash. As a result of this unsafe situation most forms of motorsport banned the sliding skirt as well as other movable aerodynamic devices. 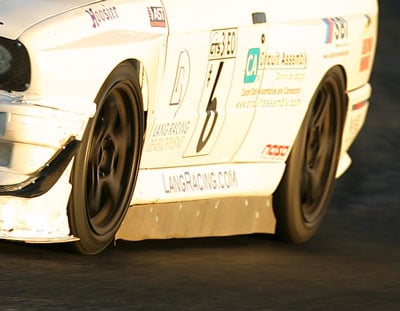