Finally we can focus on the areas of the car that really tie the whole system together. As we’ve discussed before its crucial that the car be considered as a complete aerodynamic system, not as separate components. Whenever a single component is changed, one has to consider how that affects flow in other regions. To begin, I’ll illustrate a simple BMW aerodynamic system that is simple to design and implement and will get about 90% of the performance that professional teams spend thousand of dollars to achieve. 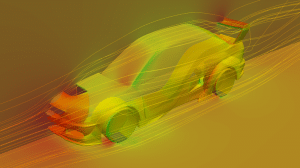 Starting with the splitter we’ve talked about before with the air dam behind it and a ride height somewhere between 3-3.5″ off the ground. From there we’ll focus on the airflow underneath the car and what we can do with it. The idea of the splitter is to create a small volume of fast moving air moving underneath the car. Fast moving air creates a low pressure zone. The secondary goal is to keep that air moving as quickly as possible with as little obstacles to trip it as we can manage. Usually this is very difficult, we have exhaust systems, engines, transmissions, drivetrain and suspension components all in the way. A simple solution is to create an underpanel system that can be rigidly attached to the car using strong fasteners. The most basic design is a flat panel leading from the diffuser all the way to the mouth of the diffuser. You’ll want a small rake from front to rear to allow the air to expand slightly and slow down. This creates some downforce as well as ensures that you aren’t creating drag when the car pitches. The important region to think about is the diffuser mouth. If we did a good job on our splitter and underpanel we have a low volume of very fast moving air entering the diffuser mouth. When it turns the corner is where we will be creating or downforce peak so its important that you choose your entry location carefully. On BMW’s we’re usually pretty limited to starting it just behind the differential, anywhere further forward is pretty impractical because of the rear suspension and differential as well as the low ride height we run the cars at. If we start our splitter at 3″ off the ground and have a 1-2 degree rake from front to back our rear diffuser entry will need to be somewhere between 6-10″ off the ground depending on where we decide to start it.

The next important consideration is the angle of the diffuser to the ground and how many strakes we’ll put in it. Without wind tunnel testing availability its best to use a small diffuser angle to ensure that the air isn’t detaching and going turbulent (creating drag). I usually stick with angles around 7-10 degrees. A nice feature to build into your diffuser is the ability to adjust the angle of it by using some turbuckles. This can add some complexity to the setup but you can try different diffuser angles and see if your driver notices an improvement in grip.

Now we can discuss the placement of our rear wing in order to maximize the downforce to drag ratio (often referred to as -lift to drag ratio). In prototype race cars the rear wing is placed as rearward and as low as possible while still getting a “clean” airflow. The underside of the wing is a low pressure zone which, when placed appropriately, can help suck the air through the diffuser and make it more efficient. 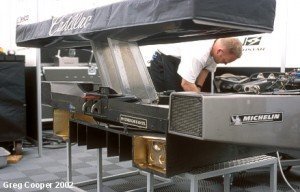 Unfortunately with the standard BMW couple/sedan platform we have chosen a fairly poor platform to make this concept work. This isn’t as true for the newer E90/92 but the further we go back (like our flagship E30) the more compromised we become. Our wing has to be raised over a foot off the trunk to get to clean air to make it efficient. Due to the rear suspension and differnetial it becomes impractical to have the rear diffuser exit much higher than the middle of the bumper so we can’t utilize the LeMans style diffuser wing interaction.

We have however been toying with a concept that was banned long ago in most forms of racing, the venturi tunnel. In almost all competitive forms of racing the cars are forced to have flat bottoms up until a particular section. In our case there are very little rules about this, so we intend to implement the “so effective it had to be banned” concept of the venturi tunnel. By having tunnels that terminate just underneath the rear wing and begin somewhere in the underbody of the car we can produce a non engine powered sucker car. The downforce created by this concept should be significantly increase downforce in the center of the car promoting a well balanced car at high speed. It’s also one of the most drag free forms of downforce we can utilize and illustrates the idea of thinking of the car as a system rather than individual components thrown together. 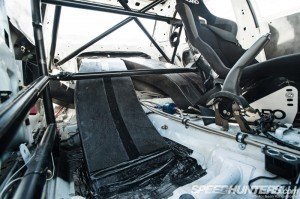