Selecting the right engine platform for a club racing car is one of the biggest decisions a racer will have to make. In the last few years most of the competitive classes have shifted towards the power to weight ratio method of classification. For some engines and chassis this has been great, but for others it has made them uncompetitive. Power to weight ratio classes have a way of making high revving naturally aspirated engines uncompetitive. Some engines have natural advantages in power to weight classes. High displacement engines with low rev limits do well due to their broad torque curve and relatively low horsepower numbers. This means they can operate in a wide rev range and still put out a good amount of power.

Below is an example of two dyno graphs from the most popular BMW six cylinder race engines with 3.2 liters of displacement. You can see that the S52 engine has a broad torque curve and a relatively low horsepower curve. Many complain that this engine “runs out of steam” towards the top of its RPM range. However, when we consider it for a power to weight ratio class it has the distinct advantage of having a peak horsepower number that is very close to its peak torque number. The S54 has a better torque curve than the S52, broader and flatter. However the horsepower curve pulls very high all the way to 7800 rpm. This means that a car with an S54 in it will have to have much more weight in it than one with an S52. That is of course unless the engine is detuned in the top of the powerband. 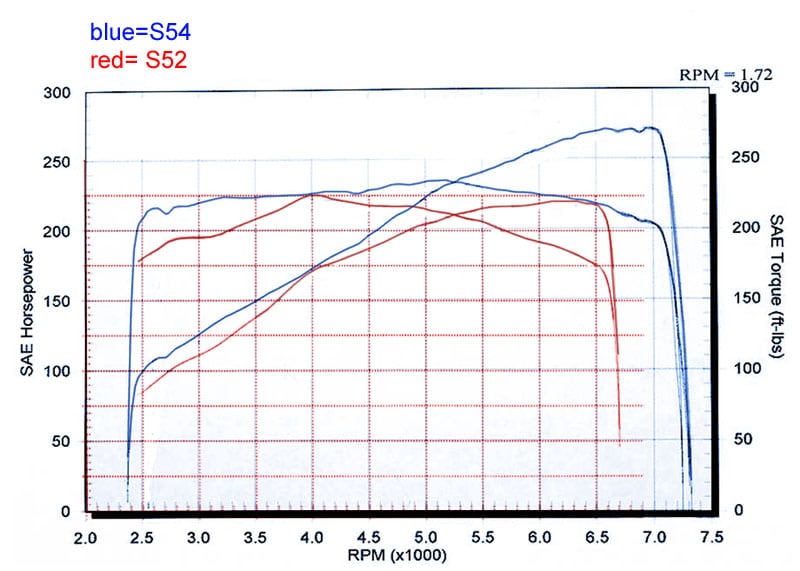 We’ve outlined what the majority of the competition is using and why they’re doing well with those engines. Our primary focus was to take the engine we’ve been racing for several years and have developed into a very reliable and simple endurance racing engine. The BMW S14 engine has its strengths but those strengths have never been said to be low end torque and a flat broad power curve. Traditionally these little 4 cylinders had to be driven at very high rev ranges in order to make horsepower and be competitive. Unfortunately what used to make this engine successful years ago simply won’t work for power to weight ratio racing.

We decided to start from the drawing board with our engine platform and see if we could take a new perspective on the S14 and make it competitive with the six cylinders. The reason we wanted to do this was because swapping the 6 cylinder into our incredibly light E30 chassis would bump us up too many classes and we’d no longer be able to race in the class we were in. Even our current S14 was already on the verge of being in the next racing class due to its high horsepower numbers.

We had several goals:

We had a couple ideas on how we could do this and we hoped by implementing all of them into a newly engineered engine we would be able to make our engine platform as competitive as the higher displacement 6 cylinders. We increased the displacement of the S14 as much as possible. The stock 2.3 liter motor had already been bored out to a 2.5 liter engine for several years. There is no room to increase the cylinder bore on this engine, the cylinder to cylinder space is already extremely tight. The only option left (and a good one at that) was increasing the stroke of the motor as much as possible. Increasing stroke on an engine has a couple downsides. The first is that when stroke increases so does piston velocity per revolution. As piston speeds increase, strain on the bottom end of the engine increase. The solution to this of course is to limit the RPM of the engine. For us this actually turned into a benefit as we used smaller duration camshafts to lower the RPM range in which our engine made power. This meant that we were able to achieve two of our goals, strengthen our torque curve and lower our peak horsepower number.
Another strategy we employed, knowing that we would have a lower RPM limit than we had ever used before, was to use a very lightweight valve train. We used modern valve springs allowing us to lower the valve train weight and spring rate. We also implemented a lighter valve by using valves with smaller valve stems and we cut those valves as long as we could to decrease shim weight. This strategy allowed us to lower valvetrain weight by over 50% and this shows in the increased torque that we had throughout the rev range.
Below is a comparison of our former race engine with our current race engine. In the past our engine was 13.1 compression and required 110 octane race fuel. Now however, knowing we would have increased power from the displacement change, we used a low 11.5 compression piston and tuned the engine for 91 octane pump gas. Despite this change we still had a very large increase in our engines torque. We could take things even further by lowering our powerband even more, using 110 leaded fuel and high compression, and rev limiting the engine to 6800 rpm instead of 7500 rpm. Smaller cams than we currently use would do an even better job of limiting our horsepower number. 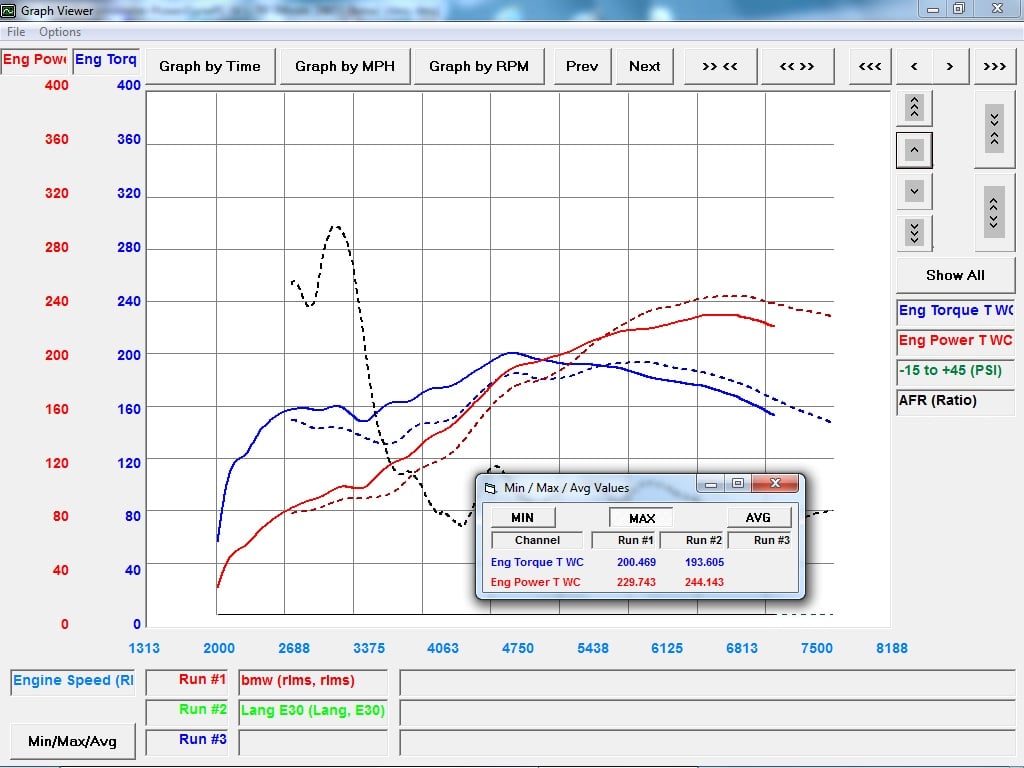 Interestingly, our 2.7L S14 engine shares a lot in common with a common street car engine. While we are running a very special bottom end, the top end of our engine is very similar to what comes on a stock BMW engine. This means that our endurance racing S14 engine makes a very good candidate for a road car engine as well as a reliable endurance racing engine.
Later this year we intend to take a similar approach at the S54 engine. As many might know the S54 has weaknesses, its been known to spin rod bearings