We recently finished building our 944 project car that we’ve had on the back burner for over a year. The push to finally complete this project was to compete with this car in a 14 hour endurance race at Chuckwalla in December. Our biggest focus for a race like this, and any of the other endurance cars we build is reliability. Engine wise we knew there was not much we could do besides hope that the stock engine we had in the car had good compression and was healthy. Because of that we focused our energy elsewhere. With any endurance build the goal is to take as much complexity out of the car as possible. If the car doesn’t need it to stop, go, and turn well, we generally remove it. Some of the things we usually get rid of on any race car build include:

Besides making the car lighter, removing these items can make the car easier to work on when time is critical, i.e. during a race. We try to make any hard to access items more accessible by removing any unnecessary bodywork and components. For this article I’ll focus on what we did with the engine harness and the gauges.
Porsche 944’s are notorious for various electrical problems, and this ends race weekends when the problem can’t be sorted out. Because we had decided to keep the stock Motronic DME we wanted to remove as much of the unneeded components as we could. We removed the idle control valve and all emissions valves and vacuum lines. Essentially all we were left with was a vacuum line for the fuel pressure regulator and damper as well as a vacuum line for the brake booster. That was it. This seriously cuts down on the risk to develop a vacuum leak, which can make the engine run lean and cause damage. The other major task was to simplify the wiring. We did this by saving the engine wiring harness, cutting out the wires for the removed components and sensors, and just keeping what was needed to run the engine. By pouring through the Porsche wiring diagrams we ended up with a simple wiring harness that contained just the following:
The reason we chose to do things this way was because we wanted to remove everything we could and switch our entire gauge management system to an AIM MXL Pista datalogger. This is a system we have used on our other race cars with great success, and the warning system has greatly minimized stress on the driver. We used AIM sensors for water temperature, oil temperature, and oil pressure which we installed using 1/8th NPT tapped holes in a couple different locations. The water temperature sensor was installed in the location where the stock water temperature sensor for the instrument cluster gauge had been. This produces a good signal and because it is part of the block it still gives a good reading for temperature even if the block loses all its water. We found this out when we blew a water line and our water temperature climbed very quickly. Our oil temperature sensor was placed in an oil cooler line. Ideally we like to place one sensor before the oil cooler and after the oil cooler to measure the effectiveness of the cooling system, but we didn’t have space for that in this application. It is important to keep the temperature sensor in a place where it will receive a stream of oil like an oil line or in the oil pan where there is a large body of oil. The pressure sensor for the oil we placed in the stock location. We also added two important separate sensors that we use on all our race cars. The first is a 3 PSI water pressure sensor which we added in place of the water system vent plug. This lets us know if we have any air in the system as well as if we have lost water pressure. This is wired to a warning light. The other, brighter warning light we have is for a 20psi oil pressure switch located near the stock oil pressure sensor location. This warns us early on if we are having oil pickup issues due to low oil level, or any other major problem. It is set high enough so that if the light goes off there will be enough time for the driver to shut down the engine and get off track before serious damage occurs. And finally, we opted to use just the stock fuel pressure warning light signal as a low fuel level light. Our experience showed that when this light goes off, its time to get off track and get fuel, immediately. We also added the GPS unit from AIM so that we could track our position on track, speed, and G forces.
The beauty of the AIM MXL Pista is that it allows us to do away completely with the stock instrument cluster, tachometer, gauges, etc, and centralize all the data needed by the driver in one compact place right in front of his face. Also, all the warning lights are customizable. We set up our system as follows:
All lights were conditional and are only on above 500 RPM, this is so they are off when the engine is off and someone is just looking at the screen.
In our experience these are the only four warnings we needed on our Porsche 944. With this system in place we had no problem running 14 hours straight. The biggest benefit of the AIM MXL datalogger for us, since we have a team of drivers, is that we can look at data at the end of the day and put together a story of what happened on track with what the driver reported. For example, we knew towards the end of our race we were running very low on oil and the pressure light had been flickering in certain turns. We were able to look at the data from the AIM MXL and see which turns the oil starvation had been occurring in, for how many laps, and how severe the pressure drops were. There’s no chance of getting this data out of a driver that is racing hard and not paying attention to their gauges. We have found that the AIM dataloggers are the easiest tool to use to setup gauges and log data on any race car. 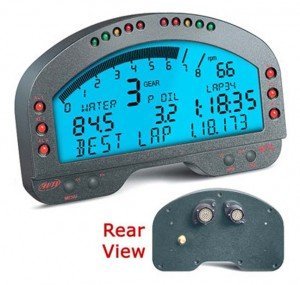